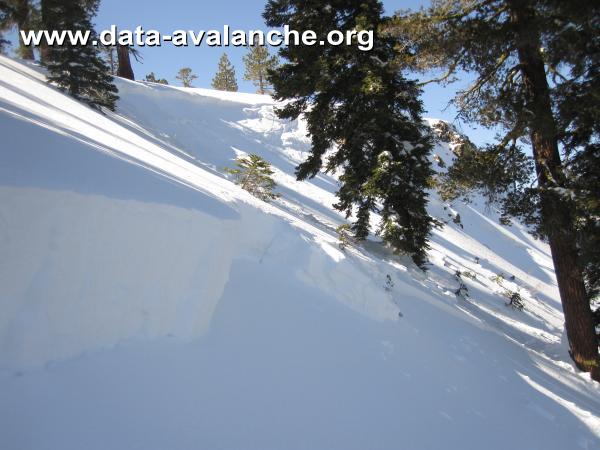 "Three
skiers skinned up towards Stanford Rocks. When they reached this area where
they wanted to ski, they dropped a small piece of cornice onto the slope as a
test. This cornice drop released a slab a few inches deep that propagated
widely across the slope.  The first skier then started to ski the slope.
On his third turn, he triggered a slab avalanche about one foot deep that
failed within the storm snow. He grabbed onto a tree and was able to stop
himself from being taken down slope. The avalanche then stepped down another
15-20 inches to a lower persistent weak layer and pulled this skier away from
his tree and down the slope into the trees below."

"This deep slab avalanche failed within a layer of faceted snow sandwiched
between two crusts. This known persistent weak layer is located just below the
old/new snow interface.
"
"The fracture was 481 feet wide (environ 146m) and ran 1235 feet (environ 376 m) through the trees downslope".